Try to imagine a world in which writing is not difficult... 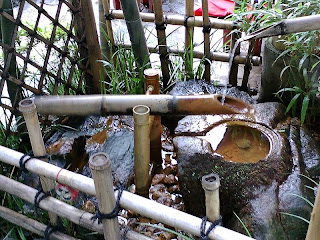 ... and is not characterized by the metaphor of agonism. To say "writing is a struggle" or "writing is difficult" implies that writing is, of necessity, something we fight with. Writing is something we pursue, rather than something we allow to come to us. When we write, then, we are active; not writing feels wrong, and we judge ourselves as being "bad," or not being writers at all if we're not  applying pen to the proverbial paper. In other words, it's not okay, in a paradigm of action, to wait, to sit, to think, to let the thought percolate to the surface.

If instead we could revision writing as organic, where the impetus to write wells up from within, as a more gentle response to inspiration, I think a few things would change. For one thing, we would not experience writer's block as it is currently thought of. I have taught seminars where the question I asked students is, "how does this block serve you? what is the writing block trying to tell you?" because usually, there are very good reasons why you're not writing. Writer's block is not what we think it is a lot of the time; in fact, it's often our mind's way of protecting us against going into a subject we're not ready to handle. Writer's block might also be a response to pain, fear, boredom, loss of interest in the subject... any number of things stimulate writer's block. However, most people get frustrated, because they're not "supposed" to experience a block. It's not how writing is "supposed" to work.

Everyone who wants to write, also wants the writing to flow smoothly, but that is unrealistic. We often feel forced or compelled to write when we really don't feel like it--sometimes for a deadline, but too often because we believe that's what's expected of us as writers. It somehow feels like failure to sit, thinking, doodling, or daydreaming. We feel like we're getting nothing done. In a different paradigm, however, this would be allowed. It would be all part of the organic flow of writing, to stare off into space, if that was what would clear your mind to allow the next new thought to emerge.

There is research that indicates that allowing the brain to rest, instead of aggressively pursuing the next thought or the next sentence, increases access to creativity. However, the most important place to begin is not with neurological research, but with acceptance that when we approach writing, we have learned to think of our relationship to writing and creativity as something we should expect will not be easy. We believe it will be difficult, and unfortunately, our adherence to that belief system is part of why it is difficult--because we see words as something we must struggle with to "get right." If instead we saw the word coming to us, and allowed words to permeate our consciousness, we could let the words gather and build momentum, until we had enough to start writing.

It's a different way of thinking about writing, and it's certainly a less invasive or painful approach. I liken it to the Japanese water catchers you see in traditional gardens; rainwater is allowed to collect at one end of a bamboo pole, in a hole or cup carved for this purpose. When enough rainwater gathers, it tips the pole down, until the rainwater falls into a stone bowl. Only when the rainwater is heavy enough can the pole tip; so too should we wait for enough thoughts, words, and inspiration to collect before we write.

I prefer this metaphor. It's a much gentler way to treat yourself when you're writing. You'll notice that the rainwater never struggles to collect; it's a natural process. No one says to the bamboo "you haven't collected enough rainwater." No one accuses the rainwater of slacking off. No one says to the rain clouds "you're not working hard enough to fill up that fountain." This way of thinking about an organic process would sound absurd, because you accept that nature works in its own time. Then why can't we, when we write? Learning how to wait for the right time is the essence of this approach.
Posted by Red White and Blue Starfish at Friday, April 23, 2010

Labels: Agonism, Organic, struggle, What do you believe about writing?, Writer's Block