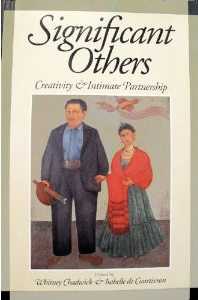 speaks to my previous post about writers who find a partner and work together collaboratively. Now, it has to be said that the focus of this book is on what were often tumultuous working and personal relationships between two artists or writers, who nonetheless inspired each other throughout the course of their lives. Ideally, the creative partnership will not be quite so tumultuous, but this book focuses on partners who were also intimately, physically involved, a reality that often makes a true mess of what would otherwise have been a good working relationship.

Some of these partnerships were so famous that movies have been made about them: Lillian Hellman and Dashiell Hammett, whose complicated on-again/off-again love affair spanned decades, and lasted until "Dash" died; Anais Nin and Henry Miller, another tempestuous romantic relationship that caused each of them tremendous anguish, even as it prodded them to works of searingly personal self-analysis; Lee Krasner and Jackson Pollock, whose relationship was turned into a movie not that long ago, called, simply, "Pollock." Another famous, and famously analysed relationship, was the love affair between Virginia Woolf and Vita Sackville-West. Vita thought of Virginia as the first person who had shown her writing any attention, and it was in this relationship, of friendship, camaraderie, and passion, that Vita's writing blossomed.
This is not to say that the only viable writing partnership is one that has sex as a prerequisite. The authors of this collection of essays have chosen to focus on this particular kind of relationship to illuminate the inherent sexism of the expectation most creative couples have, or had at the time, that the woman would inhabit the role of "muse," and that the man would benefit from her influence. The underlying truth about these relationships, however, is that they broke through the often demeaning mythologies about the role, purpose, and relative unimportance of women's work. In this way, this collection of essays is very much a feminist discussion of class and gender roles, in that it analyses myths and realities about creative women who often initially sacrificed their own abilities so that their male counterparts could create freely, and only later in life learned to value their own work more highly.
This book has a moral to it, it seems to me, for it encourages women to produce their own work, take themselves seriously, and turn to others not for approval, but for reinforcement that the desire to create is not only socially acceptable, but also worthwhile and necessary. Women often think we live 'post' feminism, but the desire to create still often seems selfish. We question our need for self-expression and creativity, and stop ourselves from producing the very artistic endeavor that would make us happy and fulfill us. The women discussed in these creative partnerships might have lived in the previous century, but many of the boundaries and restrictions they lived with, we continue to impose on ourselves, and it's time to break out of those self-imposed limitations.
Posted by Red White and Blue Starfish at Thursday, April 01, 2010