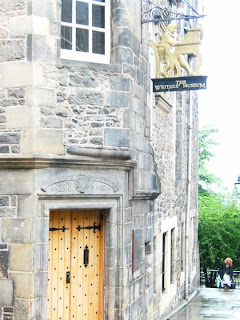 There is a lovely little museum along the Royal Mile just below the Castle in Edinburgh containing exhibits, pictures, writings, and a little bit of multi-media presentation of the lives of Robert Burns (1759-1796), Sir Walter Scott (1771-1832), and Robert Louis Stevenson (1850-1894). Tucked in to Lady Stair's House, built in 1622 for an Edinburgh merchant, one has to search a bit to find this tiny resource. It is a bookstore, gift shop, and educational center, all at once.

The house's structure is charming, and exactly what writers love; it is 'romantic' in the sense that there is a narrow circular stone staircase connecting the three floors, which is low enough that you will have to watch your head as you go up and down. On the main floor, you walk through a number of rooms with the personal effects of Robert Burns and Sir Walter Scott on display. The bottom floor contains photographs and writings of my personal favorite Scottish author, Robert Louis Stevenson, whose "Land of Counterpane" written when he was a sickly young man, forced to stay in bed due to his ongoing ill health, has always charmed me. Take a look at A Child's Garden of Verses

. I spent many, many hours reading those poems.

When I was quite young, I read Scott's "Lorna Doone," a classic novel about daring and adventure in the moors of Scotland: Lorna Doone: A Romance of Exmoor (Oxford World's Classics)

. I have long loved Robert Burns' poetry; he is renowned for writing the lyrics to Auld Lang Syne, amongst many others. See The Complete Poems and Songs of Robert Burns

if you have any interest in his writings.

On display are many items, including the swordstick used by Robert Burns while working as an Excise Officer, and the writing desk from his house. Also on display are Scott's chess set, a rocking horse he played with as a boy, and his dining table from 39 Castle Street. The printing press upon which Scott's "Waverley" novels were printed is included, as is Robert Louis Stevenson's fishing rod, pipe, riding boots and hat he wore while living in Samoa.

Outside the museum is Maker's Court, celebrating the achievements of a few Scottish writers you might otherwise never have heard of through quotes from these writers.  Here is my favorite of the stones set into the pavement outside the museum: 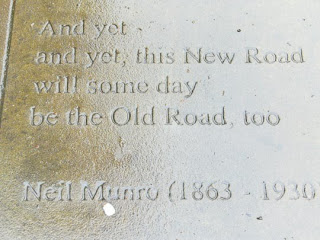 Posted by Red White and Blue Starfish at Thursday, June 10, 2010