Love of etymologies and dictionaries 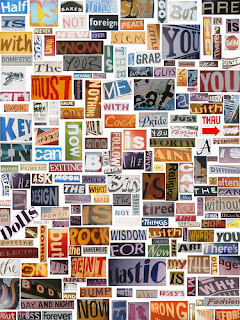 "I love the dictionary. Perhaps a love that only English majors can fully appreciate. When I was teaching, I always made my students carry little dictionaries, and we would often spend an entire class period trying to figure out what things like 'existentialism', 'modernism', and 'caucasian,' actually meant."
I found the above statement somewhere online, written by a woman who understands what it is to love words, and their meanings. To go back to a word's original source, its earliest recorded usage, is to connect with something more important than the quotidian use we've assigned it. I feel like I better understand not only the word itself, but the people and the time the word derives from. I have also told students, when they're resistant to this process of looking up words in the dictionary, that if they do not understand where a word comes from, the language is using them, they're not using the language.
To become more consciously aware of the language we're using, it is crucial to look up the origins of words. To know that a word comes from Old English, for example, is to begin to trace its development over time, and to see how it has changed, how meaning and social values have changed too. There are also people who enjoy looking up phrases, to see where and how its vernacular usage began (when, for example, we began to call a low-hanging orange-hued moon a "harvest moon").
If you ever try to explain a phrase you're accustomed to, to someone from another culture, you begin to see the insularity of a phrase; how it didn't travel to someone else's country, how instead it stayed home, and might, in fact, be something only said in your "neck of the woods." It isn't until you begin thinking about the language from someone else's perspective that you're most likely to really, truly question each individual word. Those who are not familiar with your words might be the very people who spur you to try to understand where the word 'furze,' an Old English word of "uncertain origin" according to the Oxford American Dictionary, comes from.

I remember trying to explain to someone once what "trimming the verge," a line from J.R.R. Tolkien's Lord of the Rings

, meant. Having someone question a word, and not only when playing Scrabble, is a valuable occurrence. It makes you think much more about the language you'd otherwise use unthinkingly. You also discover what the word refers to, what it alludes to, what metaphor it's relying on. If you're used to thinking of the word 'verge' as 'on the edge of' something, you might not know that for the English, it refers to a herbacious border, a piece of vegetation that gets trimmed with cutting shears. However, once you know all the ways in which the word 'verge' can be used, it adds dimension and depth to your comprehension of one simple word.
Once you begin to question the origin of words, you run into a bit of a sticky wicket, in that you then have to determine if your source is reliable. Since there are so many dictionaries now, I tend to only buy those that are capable of giving their readers the most accurate etymologies. I eschew (related to 'shy,' a word deriving from  Old English scēoh [(of a horse) easily frightened,] of Germanic origin; related to German scheuen ‘shun,’ scheuchen ‘scare’; compare with eschew. The verb dates from the mid 17th century) dictionaries that cannot tell me where a word comes from, its perambulations from place to place, its visits through time, the ways it has changed, the new clothes it wears each time someone decides to use it differently than they did before.
I think to want to know where a word comes from is a lot like wanting to understand one's genealogy. It is genealogical research for word-lovers. Think of a word you'd like to know better, and go look it up!

Posted by Red White and Blue Starfish at Saturday, September 25, 2010