The Library of Congress

This might seem like an abrupt change of subject, and in fact, it is, except for the overall subject matter of the blog, which is writing. Libraries and books are related, so it isn't too far afield. While reading the most recent Dan Brown novel, The Lost Symbol, I began researching the Thomas Jefferson building, belonging to the Library of Congress. The interiors of this building are so beautiful; I had never seen them prior to this, but would one day like to visit.

The following URL provides a tour of the building, but I shall insert some pictures taken inside the library itself.

For example, this incredibly beautiful ceiling on the First Floor has to be one of our great American treasures. It honors poets from Longfellow to Poe, whose names appear in painted wreaths around the ceiling. 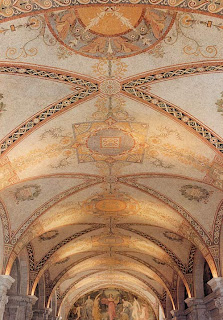 In a rarely viewed Members of Congress room, there are various panels painted to represent certain virtuous undertakings the builders and designers thought worthy of inclusion in the 1890s, when this portion of the library was constructed. This panel represents my favorite activity, "The Light of Research." 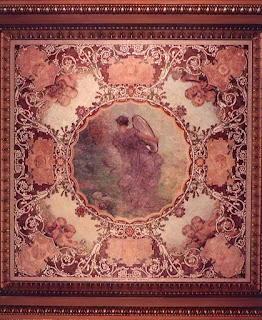 Look at the incredibly beautiful Art Nouveau detail of this ceiling on the Second Floor: 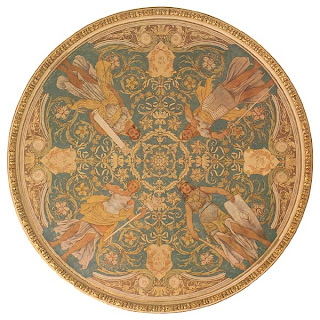 The building's interiors are so incredibly detailed and beautiful, one might miss the highlights of the contents of the library itself; the special, permanent exhibits of the Declaration of Independence, including the various drafts; Lincoln's hand-written addresses, and Christopher Columbus' written diaries and papers. This library is an amazing resource, one I had no idea was as staggeringly beautiful as it is, containing so many precious works and images (but then, I love libraries; I love the idea of libraries, and revere Benjamin Franklin for coming up with the idea of a lending library).

I shall leave you with this picture. It is of the office of the Head Librarian of the Library of Congress. It has to be one of the most beautiful working spaces in the world, and the person who occupies this post is very fortunate indeed, to work in such exquisite surroundings. 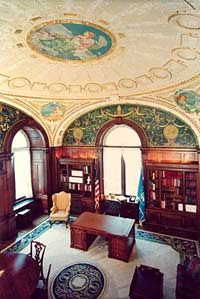 Posted by Red White and Blue Starfish at Thursday, November 19, 2009